It is impractical to count pedestrians at every roadway intersection in a large jurisdiction. For example, California has a 15,000-mile state highway system (SHS). This problem can be addressed by applying statistical models to estimate volumes at specific locations across the entire system. 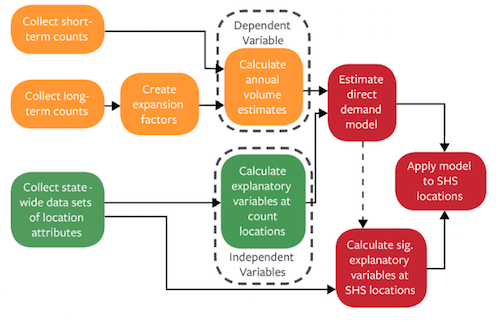 Our research on pedestrian exposure estimation has yielded the development of one of the first statewide pedestrian exposure models. This model was estimated within a direct demand modeling framework. While the scale of this model is unique, including both urban and rural locations across a large state, the significant explanatory variables are consistent with previous models at the city or regional level. A considerable effort went into compiling and processing pedestrian volumes as the dependent variable and testing a large number of potential explanatory variables. Yet, the final model is based on three land use variables (employment density, population density, number of schools), four roadway network variables (number of street segments, intersections with principal arterial and minor arterial roadways, and four-way intersections), and American Community Survey journey-to-work walk mode share that are readily-available or fairly easy to create using basic GIS analysis. We applied the model to more than 12,000 intersections across the California SHS. The estimated annual pedestrian volumes can be used in future Caltrans and local safety studies to better understand the risk to pedestrians on the SHS.