University of California Center on Economic Competitiveness in Transportation

Intersections present a very demanding environment for all the parties involved. Challenges arise from complex vehicle trajectories; the absence of lane markings to guide vehicles; split phases that prevent determining who has the right of way; invisible vehicle approaches; illegal movements; and simultaneous interactions among pedestrians, bicycles and vehicles. Unsurprisingly, most demonstrations of automated vehicles (AVs) are on freeways; but the full potential of automated vehicles – personalized transit, driverless taxis, delivery vehicles – can only be realized when AVs can sense the intersection environment to safely and efficiently maneuver through intersections. As is evident from intersection incidents with Google [1], Uber [2] and Tesla [3] AVs, their performance can be improved.

AVs are equipped with an array of sensors (e.g., video cameras, RADARs, LiDARs, GPS) to interpret and suitably engage with their surroundings. Advanced algorithms utilize data streams from such sensors to support the movement of AVs through a wide range of traffic and climatic conditions. However, there exist situations, in which additional information about the upcoming traffic environment would be beneficial to better inform the vehicles’ in-built tracking and navigation algorithms. A potential source for such information is from in-pavement sensors at an intersection that can be used to differentiate between motorized and non-motorized modes and track road user movements and interactions. This type of information, in addition to signal phasing, can be provided to the AV as it approaches an intersection, and incorporated into an improved prior for the probabilistic algorithms used to classify and track movement in the AV’s field of vision. Any connected vehicle (CV) with Advanced Driving Assistance System (ADAS) or an AV can form a real-time map of an intersection, provided that its on-board sensing capability is augmented by infrastructure sensors that: 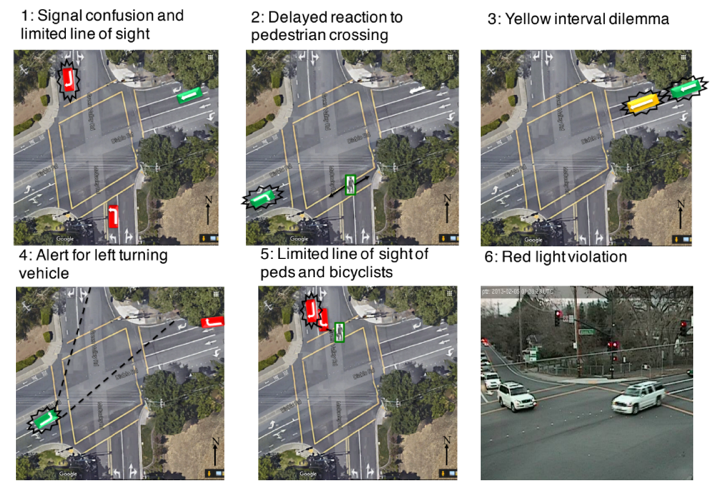 Additionally, we must be able to quantify intersection’s safety and mobility performance by analyzing its design and network configuration (Figure 2). All these algorithms will be implemented in an open-source software suite called Intelligent Intersection Toolbox that we started developing in the course of this project [4]. The impacts of this development will include: