UC Berkeley SafeTREC is excited to release the 2022 California Traffic Safety Survey led by Ewald & Wasserman Research Consultants (E&W). This study was conducted on behalf of the California Office of Traffic Safety (OTS) and the Safe Transportation Research and Education Center (SafeTREC) at the University of California, Berkeley.

Speeding and aggressive driving was the biggest safety concern for California drivers (75.0% of surveyed drivers) according to the 2022 California Traffic Safety Survey. This was followed by concerns around distracted driving because of texting (71.5%) and drunk driving (67.4%). 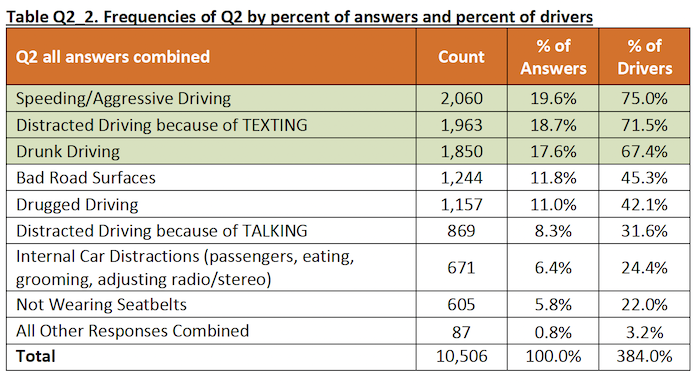 Survey responses to "In your opinion, what are the biggest safety problems on California roadways?"

Data has been collected for the traffic safety survey since 2010, and transitioned from in-person interview (intercept) surveys to an online survey in 2020. A total of 2,768 responses were collected in April of 2022. Overall travel behavior and travel mode and frequency of travel were likely affected since the onset of the COVID-19 pandemic in early 2020 and may have contributed to different perceptions of travel safety. The 2022 survey also added a few new survey items describing ways to increase safety for all road users, based on the Safe System approach introduced by the U.S. Department of Transportation.

Explore a selection of key findings from the 2022 survey below:

Read more about the findings and download the full 2022 survey.