Welcome back to the 2019 SafeTREC Traffic Safety Facts blog series, where we feature recent data on some of California's most pressing traffic safety issues! Explore our recent posts on:

In today's post, explore SafeTREC's fact sheets on motorcyle safety and occupant protection. In our last post, we'll wrap up the series and highlight the facts on emergency medical services.

Get the Facts: Motorcycle Safety 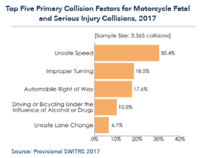 Get the Facts: Occupant Protection

Restraint devices such as seat belts are a key element of motor vehicle occupant protection systems. Each year, the National Highway Traffic Safety Administration (NHTSA) conducts the National Occupant Protection Use Survey (NOPUS) that measures, among many variables, the use of seat belts by occupants age eight and older. The 2018 NOPUS reported an 89.6 percent front seat belt use rate for the nation as a whole, which was essentially level with the 89.7 percent rate in 2017. However, it reflects a significant decrease in the seat belt use rate in the western region from 94.5 percent in 2017 to 92.7 percent in 2018. Drivers had an 89.9 percent use rate and right-front passengers had an 88.7 percent use rate. States with a primary seat belt use law had a seat belt use rate of 90.6 percent compared to 86.4 percent in other states. Read the 2019 SafeTREC Traffic Safety Fact Sheet: Occupant Protection.