Welcome back to the 2019 SafeTREC Traffic Safety Facts blog series, where we feature recent data on some of California's most pressing traffic safety issues! Explore our recent posts on:

In today's post, explore SafeTREC's fact sheets on alcohol-involved and drug-impaired driving. In our next post, we'll be highlighting the facts on motorcycle safety and occupant protection.

Get the Facts: Alcohol-Involved Driving 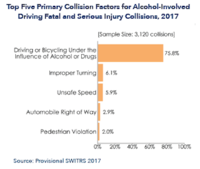 Get the Facts: Drug-Impaired Driving 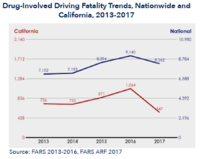 Driving under the influence of drugs is a significant threat to public safety. Various substances can impair cognition, attention, coordination, and other brain functions critical to driving safety. Unlike alcohol, the mechanism for absorption, distribution, and elimination of drugs from the body, as well as cognitive and behavioral effects differ greatly. The use of cannabis, prescription drugs, and other drugs are increasingly prominent on our roadways, where 22.2 percent of the nation’s 37,133 fatalities in 2017 were related to drug-involved driving. Read the 2019 SafeTREC Traffic Safety Fact Sheet: Drug-Impaired Driving.